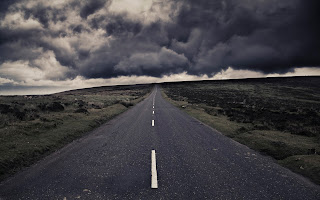 It was nightime, but the moon couldn’t appear between the grey wintertime clouds that announced that a storm was coming. The raindrops of a fledging rain were starting to make the windshield wet, imposing their rhythm on the empty streets barely lit by the streetlights. I needed to get there fast, but something in the air evaporated all my hurries… A premonition, perhaps, or a warning, maybe just the wind full of humidity inciting my senses.

I veered to the right, and I suddenly found company. The light of their cars felt friendly, for once, even with their blinding glow. I took the empty left lane and slowly accelerated expecting to get to the stoplight. A yellow light suddenly crossed through my windshield, like a rabbit trying to get to its lair. It was a small school van suddenly entering my lane, ignoring me and the metal machine enveloping me. I couldn’t break, and trying to dodge it only took me slightly to the right. The sounds of the crash exploded in my ears like a terrible orchestra of shrinking and clashing metals. The airbag slammed against my eyes, and my glasses flew through the air in an unknown direction.  For a second I could only see white. For a second I was dead. No musings, no heat, no airbag on my face with its distinctive burning odor, no pain on my leg. When I opened my eyes, the pain and my thoughts quickly came back to me, and I could only see that my car’s front was wrecked and wet. In the distance, I heard thunder. And that’s how I traveled from one storm to another.